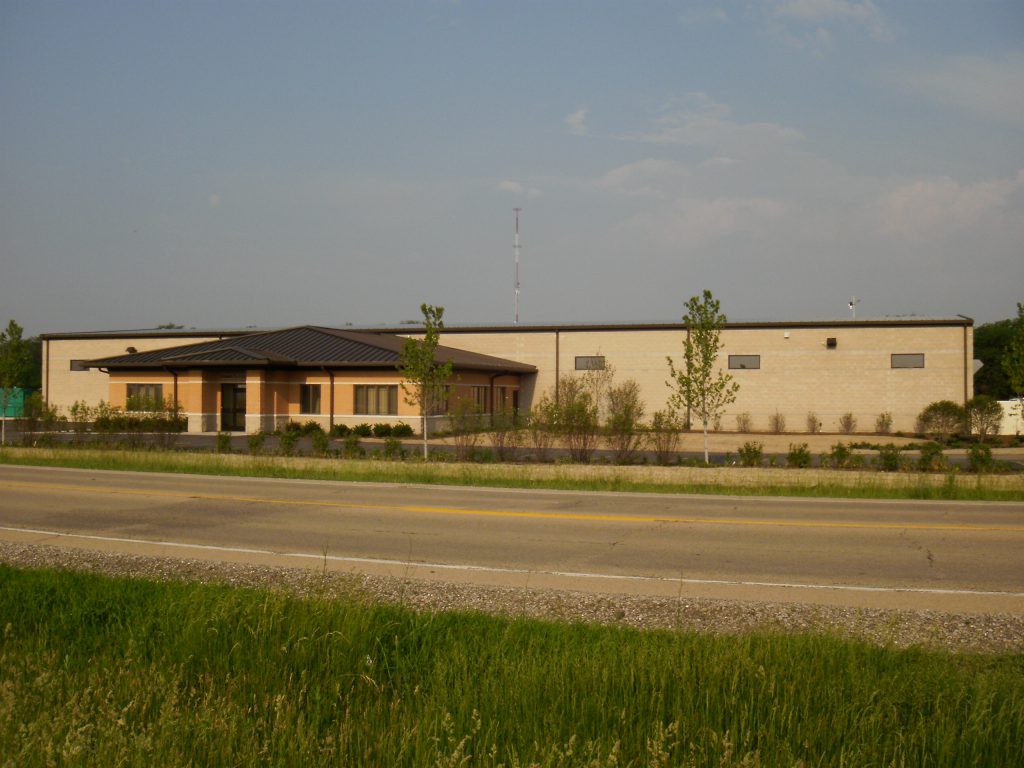 The Grundy County Highway Department has been a major part of Grundy County’s history and development.  The Department is charged with building and maintaining the County’s highway infrastructure.  How the roads and the department came to be is due to a history of road and bridge building, passage of state laws, and even a massive fire.

The Grundy County Highway Department’s history goes back well before its inception and even before European settlement.  Native Americans were the first residents to live in what would become Grundy County.  They utilized foot paths and the area’s rivers as the first highways to travel from place to place.  The first recorded Europeans to visit Grundy County were the French explorer Louis Joliet and the missionary Father Jacques (sometimes called Pere) Marquette in 1673.  They passed through the future Grundy County using the Illinois River while returning to the St. Ignace Mission, present day St. Ignace, Michigan, after exploring the Mississippi River.

The settlement of Grundy County however did not occur until the 1800’s.  The first major transportation project to come to the area was the Illinois & Michigan Canal which began construction in 1836 and was completed in 1848.  The canal was the final piece to a complete water link between the Great Lakes and the Mississippi River.  While it was primarily a canal, the adjoining towpath was commonly used by travelers on foot and on horseback.

Several towns, including the City of Morris, were founded during the canal’s construction.  These towns became stopping points and places for commerce along the canal.  In 1853, the county had its first railroad, the Chicago & Rock Island Railroad, which connected Grundy County to cities like Chicago, Joliet, Ottawa, Rock Island, and later the Transcontinental Railroad when it was completed in 1869.

Grundy County became an organized county when it separated from LaSalle County in 1841.  With the new county, five road districts were formed to build and maintain roads.  Each district had a road supervisor and every able-bodied male between the ages of 21 and 50 was expected to give 1 day of labor per year to the road district.  The property taxes paid to the road districts was 5 cents for every $100 of assessed property value.  Those early years saw slow development of roads.

The soil conditions that made Grundy County such a valuable asset to farmers, was a construction nightmare for road builders.  The roads were poorly made, usually dirt paths, and often became so muddy that they were nearly impassable for extended periods of time.  The soils were very poor to build on as they became very soft and sticky when wet, settled unevenly, and were very susceptible to frost heave in freezing temperatures.  Even today the County’s soils continues to create problems for road builders.

With the coming of the automobile in the early 1900’s, also came the demand for good roads.  The township road districts could no longer meet the demand for higher quality roads.  To solve this issue, the State of Illinois passed the Tice Law in 1913 which created among others, State Matching Aid for road building and the County Highway Superintendent position (renamed County Engineer in 1992). 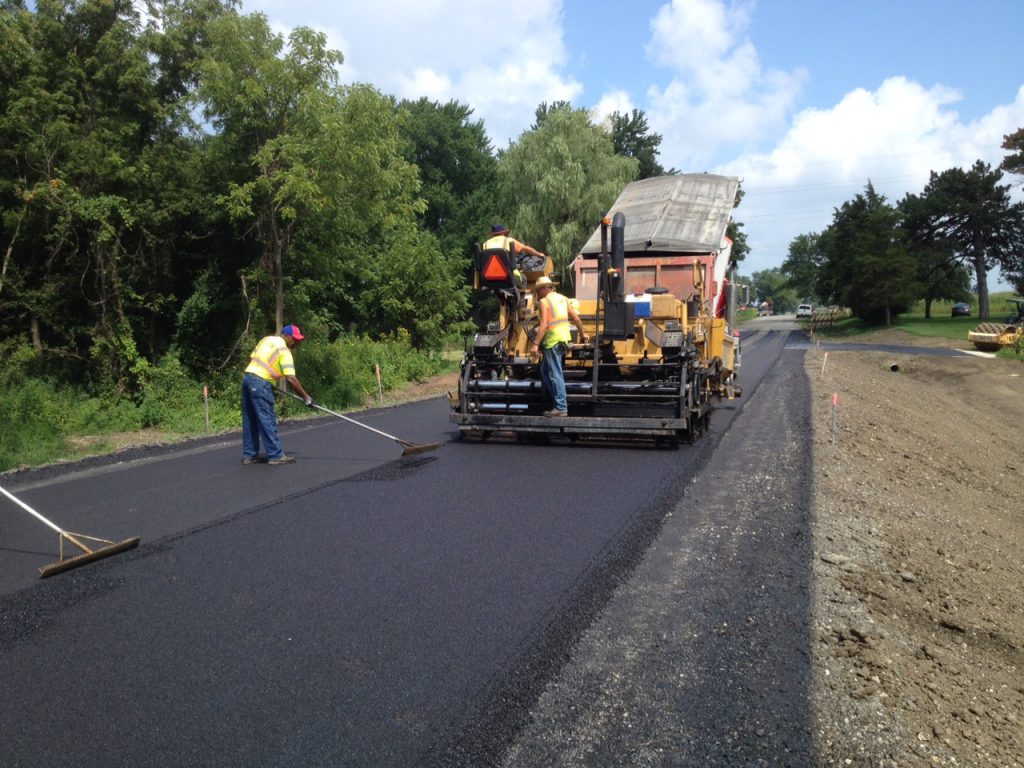 The first paved road built by the new Department was opened Saturday, July 3rd, 1915.  It was 1.75 miles of concrete pavement from the “Pike Road” running south out of Morris. Today it is known as Dwight Road.  It was constructed with wheel barrows and horse carts by Booth & Nicholson of Gardner.  This section of highway was later abandon in 1934 with the opening of a new Illinois River bridge and the rerouting to Illinois Route 47 1/3rd of a mile to the east.  Since the first pavement was only abandon, some it still exists to this day, though no longer maintained by the County.

Up into early 1960’s, roads were not named.  Residents just had a postal designation such as “Rural Route 6”.  The naming of roads began around 1960 at the request of the US Post Office trying to improve mail delivery.  The names of the roads often reflected the names of some of the first families that lived on that road such as; Nelson, McArdle, Gonnam, Ashley, Gorman, and Scully Roads.  Other names came from towns, streams and other landmarks such as; Jugtown, Gardner, DuPont, Kinsman, Minooka, Nettle Creek and Airport Roads.  Old Stage Road was named for the fact that it was an old stage coach route between Morris and Seneca.

As Grundy County has many creeks and rivers, not to mention the Illinois River, bridges have been an important part of the County’s transportation history.  County bridges developed slowing.  The oldest, still standing, bridge in the County is the Dellos Road Bridge over Aux Sable Creek near the Aux Sable Aqueduct in Channahon.  Originally built by Aux Sable Township, today it is maintained by the Village of Channahon.  The bridge was constructed as a concrete arch bridge in 1873 and reconstructed in 1967.  The oldest existing steel bridge is the Jugtown Road over the East Fork of the Mazon River in Maine Township.  The bridge was built in 1884 and was built with steel forged by Carnegie Steel Company.  The bridge was closed to all traffic in 2008 as it had deteriorated to a point it could no longer handle traffic.

In the early days, crossing the Illinois River was difficult.  A ferry at Morris was run for many years and was the only way to cross the river.  Residents recognized that a bridge would be needed and in 1855, the Morris Bridge Company was formed.  The new company built the first bridge across the river for $45,000.  The bridge superstructure was built from wood and was located approximately 1/3rd of mile west of the current bridge.  The bridge opened on March 15, 1856 and charged 15 cents during the day and 30 cents at night to cross.  Toll collection ceased after 1899.

In 1900, this bridge was replaced with the 2nd river bridge made of steel.  This bridge stood until 1934 when it was removed to make way for the new Illinois River waterway and was replaced by the 3rd river bridge.  The remains of the 2nd bridge abutments can still be seen from the river.  The 3rd bridge was built at a cost $232,768 and was built with steel trusses.  This bridge and Route 47 were relocated east of the 2nd bridge to its present location by the State of Illinois.  The 3rd bridge was in service until 2002 as over time, weather, traffic and deterioration had taken its toll on the structure.  In 2001, the Illinois Department of Transportation (IDOT) began construction of the 4th river bridge and it was completed in 2002 at a cost of about $34 million.  This bridge was designed to carry 4 lanes of traffic to accommodate the increased traffic volumes in the county.

Bridge enthusiasts have been visiting historic looking Five Mile Bridge carrying Old Stage Road over the Illinois & Michigan Canal and Trail since it opened in 1995.  Located west of Morris, the name comes from its location being five miles from both of the towns of Morris and Seneca.  The structure was recognized by the Federal Highway Administration for its unique design and for being the first timber arch bridge in Illinois.  The bridge replaced a small streel truss structure that had become obsolete and was not capable of handling today’s traffic loads. 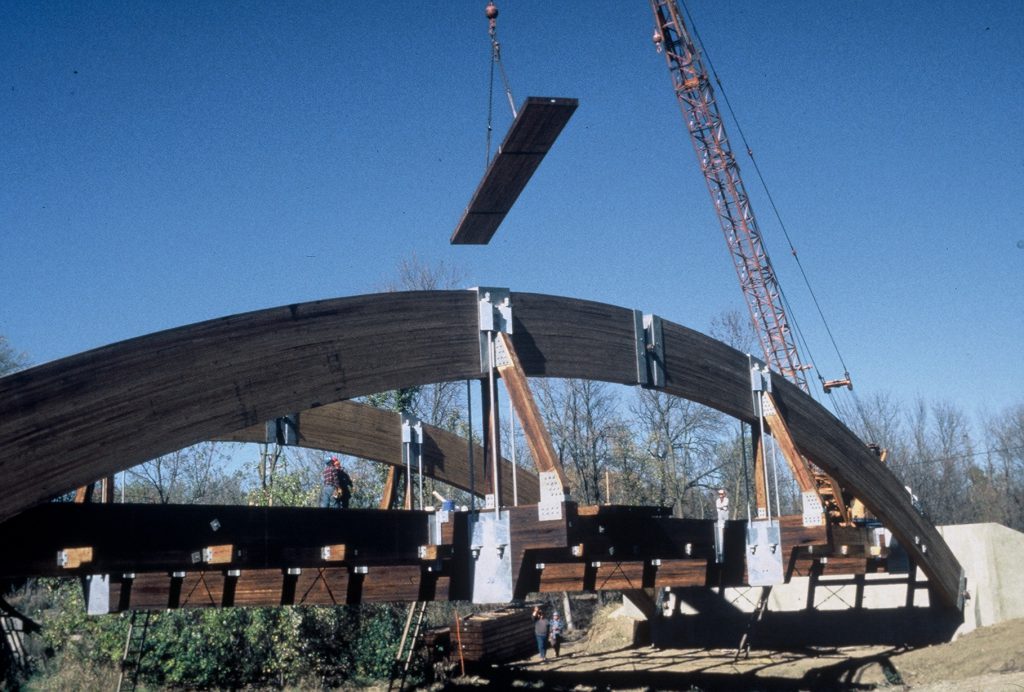 A major county bridge that also has some history is the Pine Bluff Road Bridge over the Mazon River.  The first bridge crossing here was a wooden structure referred to as a covered bridge, although it was not actually covered.  Though its year of construction is unknown, it was probably built in the mid to late 1800’s.  The name was given due to the vertical red wooden boards that were on its sides to keep horses from being spooked by the water flowing beneath it.  This bridge was replaced by a metal truss structure in 1911.  This structure was then replaced with the 3rd bridge in 1958 with a steel I-beam bridge and was relocated just a few feet north of its predecessor.  The 2nd bridge abutments can still be seen just south of the current bridge.  The third bridge stood until 2010 when it was replaced by the current structure in the same location. 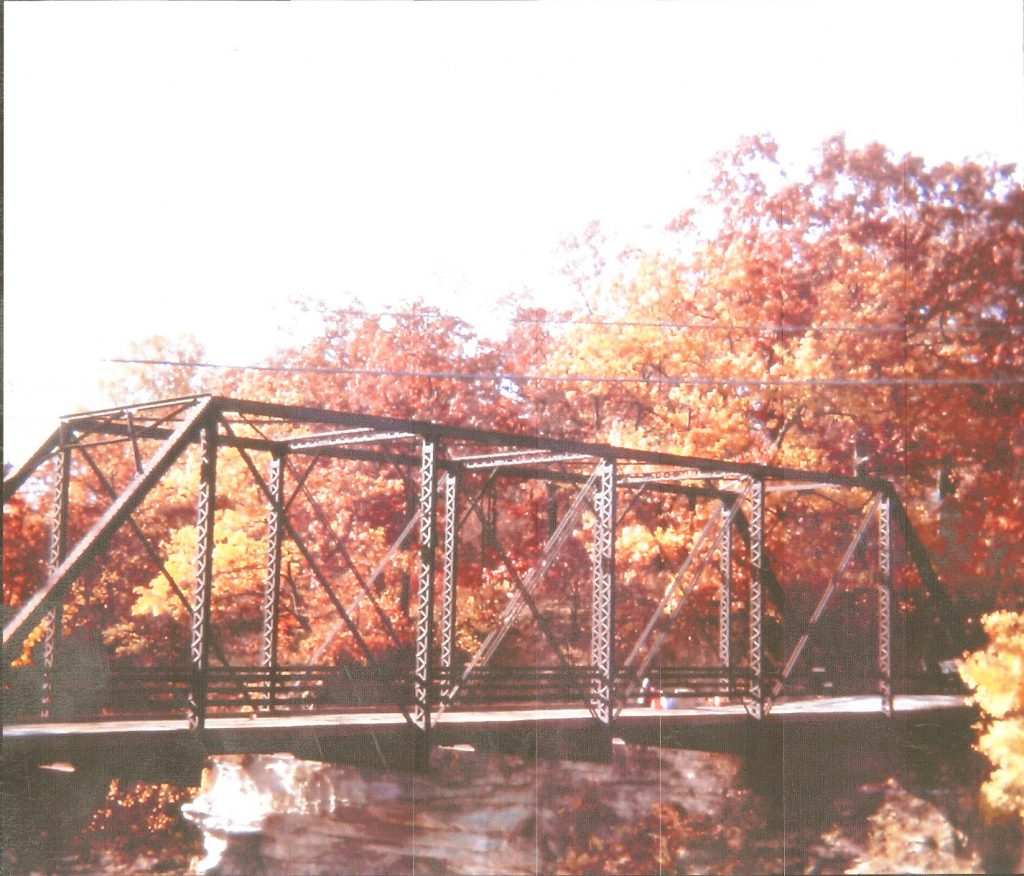 The Highway Department has had its share of difficult circumstances as well.  The most difficult time began in the early evening of December 5th, 2007, when the Department suffered a major fire.  The fire destroyed nearly all of its equipment and a total loss of the building and garage located on DuPont Road.  All of the Department’s plow trucks, pickups/SUVs (except 1), tools and other maintenance supplies were lost.  Fortunately, no one was in the building at the time and most of the Department’s paper files survived.  The fire is believed to have been caused by a hydraulic line leak in one of the county snow plow trucks that was ignited either by a hot engine or a short circuit.  The total loss was estimated to be around $2 million dollars.

The fire left the Highway Department without any way to maintain or clear snow off the county roads.  However, several townships, municipalities, businesses and surrounding counties stepped up and came to the aid of the Department.  These agencies loaned plow trucks, provided buildings to store equipment and even plowed of some of the County’s roads for the remaining winter season.  The Department and the County are extremely grateful for the show of support from all the surrounding communities. 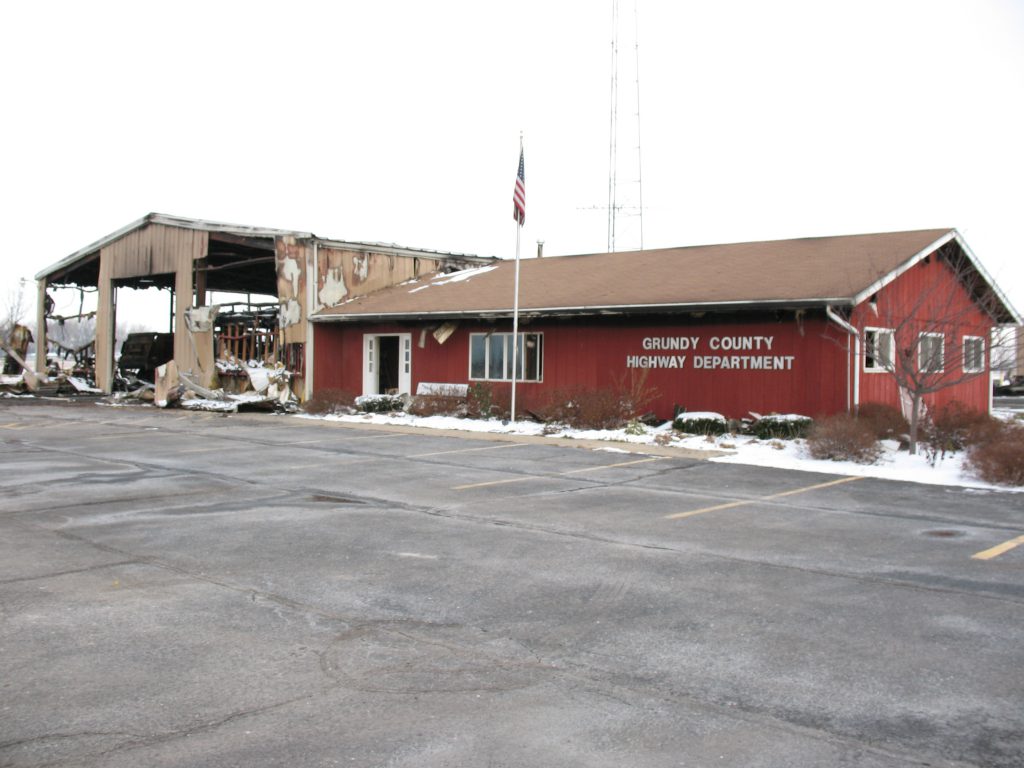 Old Highway Building after the fire in 2007. (Photo by GCHD)

Click here to see a PDF containing slides on the fire damage and some of the assistance provided by others to the department.

After the fire, the Highway Department offices moved into temporary accommodations, first in the Sheriff’s Office Building basement and later into office trailers until the current Highway Department Building was completed in 2009 at its present location. During this period the Department was able to replace its plow trucks for the 2008-09 winter season, replace the lost pickups/SUV’s and recover most of the file archives. The County Board decided to reuse the old Highway Building site on DuPont Road for the new County Animal Control Facility which opened in 2011. 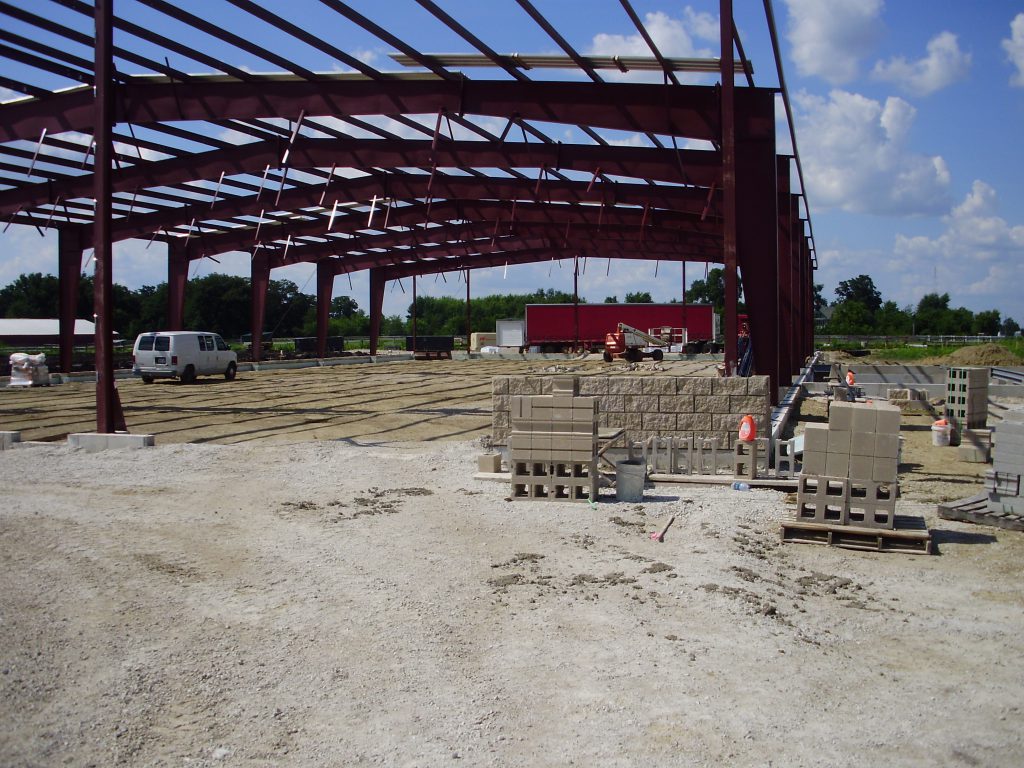 When the new Highway Department building opening in 2009, it was bigger, more modern and safer.  The design of the new building incorporated the lessons learned from the fire such as a sprinkler system and 24 hour electronic monitoring.  The building provides more indoor storage space for equipment and supplies, a truck lift for maintenance staff to maintain to vehicles and equipment, a vehicle wash bay to keep the Department vehicles clean, and a conference room to hold meetings such as for the Highway and Transit Committee.  With the larger office space in the new building, the Transit Department was able to have space for their administrative staff as well.  To save energy and heating expenses, a geothermal heating system was installed into the garage.  In 2016, the Department constructed a new 4000 ton salt storage building next to its facility which will decrease the time and extra driving needed to load salt in the plow trucks. 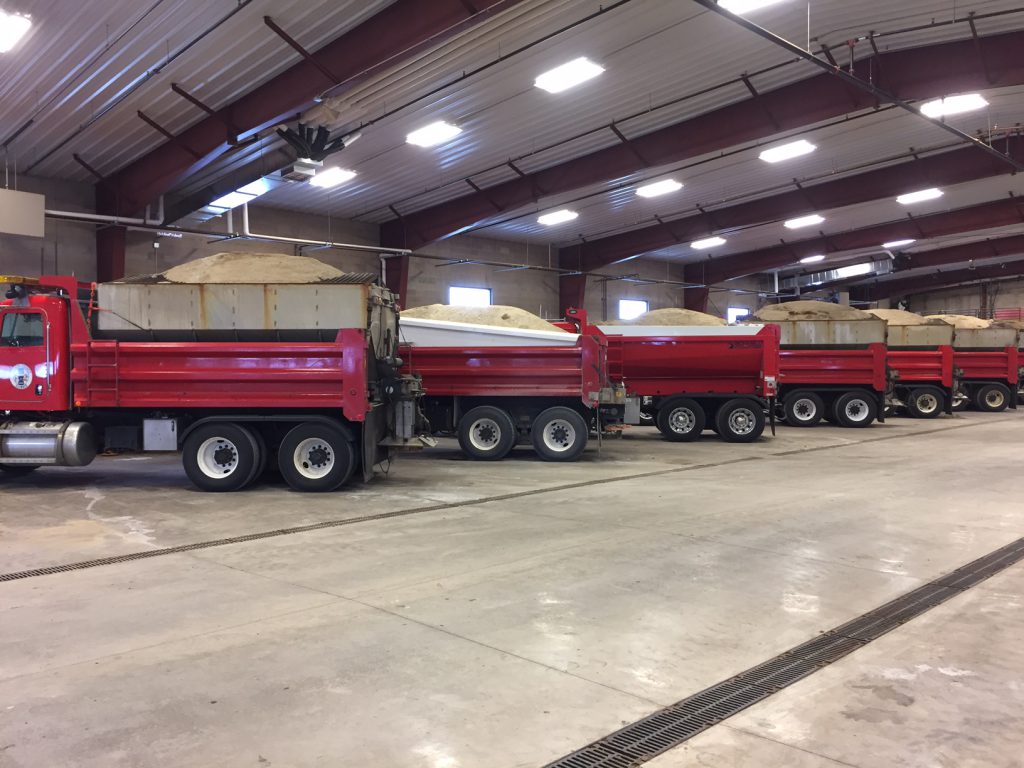 Today the Highway Department continues to build and maintain the County’s 139 miles of roads and 40 bridges. It also assists the County’s 17 townships with the construction and maintenance of their combined 512 miles of roads and 153 bridges. Much has changed since building that first stretch of concrete. As the road building continued, new technologies, materials, and equipment were developed to improve the speed and quality of the construction of roadways. Since the Highway Department’s inception, there have been five County Highway Superintendents/County Engineers. These men were Fred W. Stine, Charles H. Moon, Sam H. Bergstrom and Richard (Dick) E. McTague. The current County Engineer is Craig J. Cassem who began his tenure in 1990.

For over a century, the Grundy County Highway Department has worked to build and maintain the County’s highway system.  Today, the Department continues its commitment to the people of Grundy County to ensure that they have reliable roads that allow them to work and live in a place we all call home.